Jasmina Mihajlović(1960) and Milorad Pavić(1929 - 2009) are Serbian
writers, but also a marital-romantic-literary couple, with an age
difference of 31 years. She fell in love with him reading his books. She
didn’t even know what he looked like. She fell in love with his Words.
Later she graduated with a thesis on his stories in the Serbian capital,
at the Faculty of Philology. And then she met him. He was already the
famed author of the Dictionary of the Khazars, of world renown, winning
over Europe and America with his books.

For a long time they thought they could never be together because of their
age difference. But after five years of cooperating, without
any physical contact, they realized that they couldn’t live without one
another and decided to leave their former lives and marriages. They rented
a one-bedroom apartment in Belgrade. Pavić was 62, Jasmina - 31. A war was
raging through the Balkans.

His fame was fading in the West, and blossoming in Russia and South America.

They got married and lived in Belgrade and Paris, refusing to emigrate to
France as they had been offered. Belgrade was home to their former
families and their children from their previous marriages.

They travelled all over the world, despite the sanctions against Serbia
during the war in the Balkans in the 1990's. 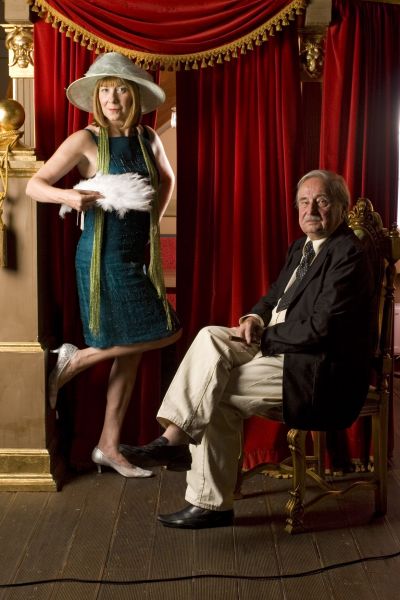 Pavić wrote his books, and Jasmina mustered up the courage to follow her
work as a literary critic with works of fiction, despite the fact that her
husband's books had already been translated into 36 languages at the time.

And thus, although they lived together, they actually wrote each other
long love letters. Stories, novels, plays. He would dedicate his books to
her, she would write about their life in hers. Even in their literature
they couldn’t survive without one another.

Yet their literary styles are so different. Pavić was lavishly turned
towards the past and towards eternity, Jasmina - minimalistically towards
the present and the future.

He died at the age of 80 and was immediately forgotten in his country and
his home town. Yet all over the world quite the opposite was true!

She continued to work with his books and to publish his writings
worldwide. She posthumously released 66 of his works. She even won over
the Chinese publishing scene.

She takes care of his Bequest, bequeathed to his Belgrade, but continues
to write her own books as well. Books in which he is still the main
character.

During his lifetime the Russians built Pavića statue in Moscow, while in
downtown Belgrade his statue was erected by Azerbaijan, because in
Azerbaijani the Caspian Sea is called the Khazar Sea.

They will never stop loving each other. This is a literary and life story
with a happy end.