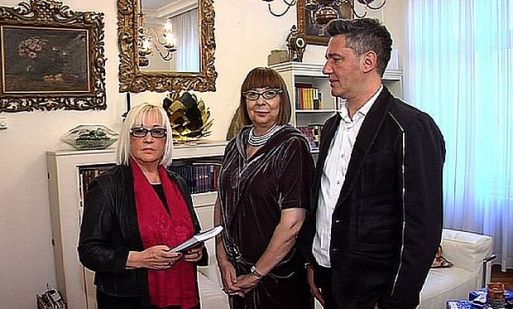 In the show "Exclusive" by Mira Adanja-Polak, dedicated to the widows of Serbian writers, Jasmina Mihajlović, the writer and widow of Milorad Pavić talks about her marriage and her life with Pavić. The show was based on the book "The Guardians - the Widow of Writers" by Aleksandar Đuričić.
The viewers will see the home, now the Bequest of a glorious writer. Bequest of Milorad Pavić will be opened for European Heritage Days, a manifestation under the auspices of the Council of Europe, which is held every year on the whole continent, at the end of September.

The publishing house Dereta has released the first illustrated edition of the Milorad Pavic’s Dictionary of the Khazars in English. The author of illustrations is famous Bulgarian artist Yasen Panov.

These detailed and luxurious drawings that Panov created, was inspired by the book over the past twenty years. The original bibliophilic edition in Bulgarian made on large-format sheets placed in a metal box with a cover made of cast glass was presented to the audience two years ago in Sofia.

Milorad Pavić's Bequest was established in 1992 by Belgrade City Assembly. It is situated in Belgrade, Dorćol quarter, in a home where Pavić lived with his wife Jasmina Mihajlović, also a writer. According to the contract and the Probate Decision, after his demise (2009), the legal guardians of the Bequest except the City Assembly, became Jasmina Mihajlović who will live in Bequest until her death and also Ivan Pavić – a painter, the son of a writer. After that, the ownership of the Bequest will be taken over by the City of Belgrade.

In Paris, in the theatre Odeon, Milorad Pavic’s Dictionary of the Khazars was given the Le Nuit du Livre award for literature for 2016. The book was awarded because of Milorad Pavic’s extraordinary text and Gabrielle Coze’s graphic design which gave it the magnificent look. Le Nouvel Attila is the publisher.

Jasmina Mihajlović gave an exclusive interview regarding the Albanian edition of Pavić's novel The Landscape Painted with Tea (Ben Andoni's translation) that was published by ''Albas''. Named Serbia and Albania learnt during socialism to nurture the culture of oblivion, the conversation with Jasmina Mihajlović was published in the magazine ''Milosao''.

The re-edition of the Dictionary of the Khazars, published in Paris on the 15th of October, Pavić’s birthday, by the publishing house New Atilla, and translated by Maria Bejanovska, has been sold out in a month (3.000 copies)!